How fast could a 1000 piece jigsaw puzzle be completed

Suppose you take 12 hours to complete a 1000 piece jigsaw puzzle. If you had a friend helping how long would it have taken? it would probably not be less than 6 hours, unless you had some complimentary skills (e.g. he was good at recognising subtle shades of blue found in the sky peices whereas you could match a peice in your hand to the image on the box). For the sake of this discussion we'll say 6 hours.

What if we add another friend? We might find this one is particularly good at the matching the fine detail of the foliage and we get our time down to 4 hours. In all three scenarios the number of completed pieces per person-hour (ppph) is the same (83). Eventually though, adding another friend will slow down the ppph rate. For example when we have five friends working on the puzzle this may take 3 hours at a ppph of 67.

Most IT 'managers' understand this analogy - they understand that adding developers to a project (in order to deliver it earlier) will also reduce overall productivity. Many also believe that adding those extra developers will always reduce the time taken to complete the project. Let's return to our puzzling friends...

Suppose we now have a party of 10 friends working on the puzzle. We would surely start to see instances where two people are looking for peices which each other is holding, more than one person will want to look at the picture on the box at the same time, it will be impossible for everyone to access the puzzle at the same time - people will start taking peices away fit them together and bring them back for 'integration' into the main puzzle. The time taken to complete the puzzle may go back up to say 3.5 hours at a ppph of 29. (In reality some of the friends will get tired of the elbow pushing and go off to play diplomacy in the other room leaving 3 or 4 to complete the puzzle in less time - but this is an analogy so it didn't happen that way)

So adding resources can in some cases reduce productivty AND increase the time taken to complete a project. You may argue that this is not a good analogy - software development is more complicated than completing a jigsaw puzzle. Let's introduce some specialisation...

We may have:
5 puzzlers
2 collectors
1 integrator
1 puzzle troubleshooter
1 picture manager

With this arrangement we may be able to make some improvements on our completion time - say to 2.5 hours at a ppph of 40. By specialising roles and adding processes and procedures (and hours of practice) we may even be able to add more resources and complete the puzzle in 2 hours (at a reduced ppph).

There would still come a point however that adding an extra person would tend to lengthen the time taken rather than reduce it. What is even more true is that if, say, you had a target of 2 hours to complete the puzzle and after 1 hour and 45 minutes it was clear that you were not going to make it, getting a few more friends involved to help will not be of no use if they are unfamiliar with the puzzle itself (the software in development) or the roles, responsibilities, and processes used (the development methodology & standards). The likely effect is that the puzzle takes longer to complete.

What have we learned: 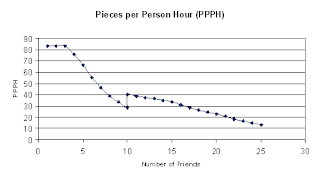 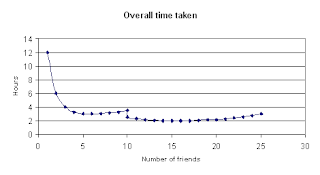