Graph Databases are not new - sites like LinkedIn and Facebook are based on highly connected data which is not managed on traditional RDBMS (Relational Database Management System) infrastructure. Graph DB technology is being rapidly commoditised with platforms like Neo4J and OrientDB leading the way. I believe they will become a new defacto standard in developing all sorts of business and online applications once the inertia of 30+ years of RDBMS thinking is slowly broken down.

Often when I describe what a graph database is - the ideal way to store highly connected data - most people just shrug and say that was solved years ago with the RDBMS platforms - they have 'Relational' in the name after all, right there as the first letter of the acronym! This post is an attempt to explain what makes them a better choice for many applications.

Firstly let's take a look at an example. Say you have a permissioning service which manages permissions for various systems grouped by roles which in turn have a list of functions. In a relational model we may end up with a tables for 'System', 'Role', 'Function', and 'Person' with additional join tables for 'Role_Function' and 'Person_Role'. A typical query of this model would be to determine which functions Person 'A' has permissions to for Application 'X'. The most basic TSQL implementation would be something like

Of course if you add in some reasonable complexity like supporting the fact that some functions may imply permissions to other functions (to edit a record you need to be able to view or search for it). Or that you might have profiles linked to positions rather than people you end up with an explosion in the JOIN factory and the TSQL becomes many times more complicated.

In a graph world however each row in each table simply becomes a node in the graph. The person A node would have a 'IS_IN_ROLE' relationship to a bunch of Roles which would be linked to systems with a 'HAS_ROLE relationship and to functions with an 'INCLUDES' relationship. Functions could relate to each other in a hierarchy. You could add Profile nodes which a Person could hold which can have Roles of their own etc. E.g. a graph looking something like this: 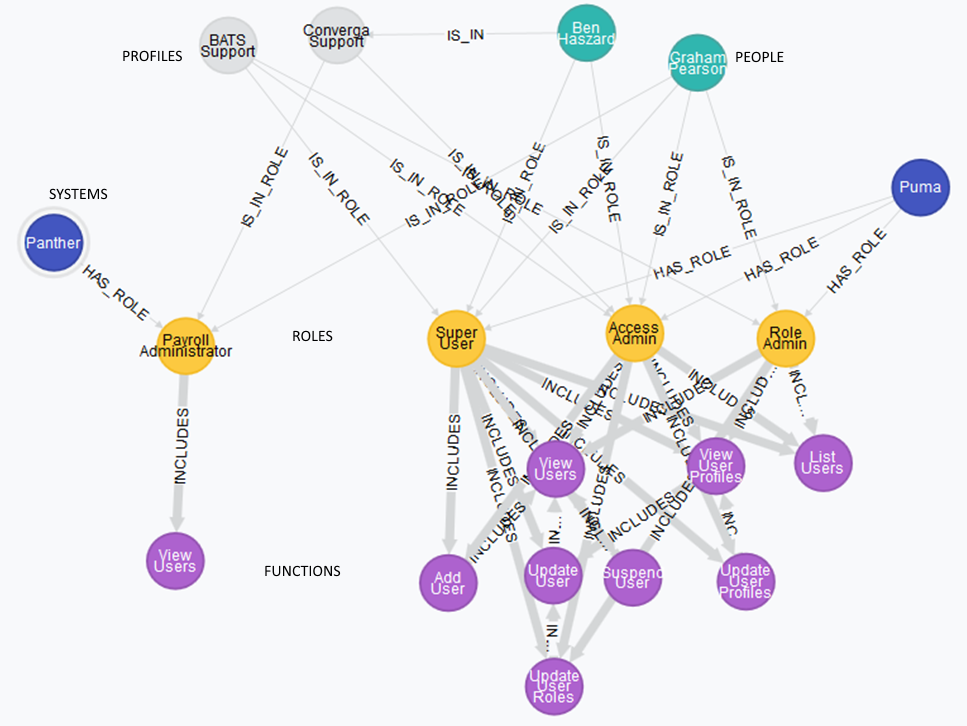 With graph technology comes new querying languages / syntaxes. Neo4J provides a very elegant Cypher language which allows you to query the graph very succinctly. E.g. our complex non-performat TSQL statement might look like this in a graph world:

This query would accommodate function hierarchies and any sorts of connections from a Person to a role (e.g. via positions). In fact whilst it's already simplier than the TSQL version above it is also more powerful, performant, and flexible to changes in the underlying model. We actually have this permissioning system in our organisation written with a RDBMS back end and with the additional complexities mentioned, the TSQL query to retrieve functions for a user takes up over 200 lines which in Cypher condenses down to the simple 3-line statement above.

So with the intro out of the way, what are the benefits?


And the drawbacks?
If you want to investigate Graph DBs some further reading and suggestions: